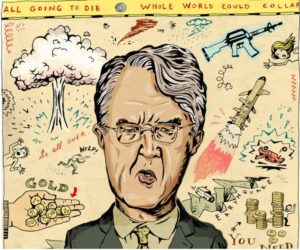 D Magazine recently published an in-depth article about Bruce Steckler’s representation of cases involving clients who have purchased gold coins from U.S. Money Reserve, an Austin-based company that he says misleads consumers into investing large sums in these coins with promises of returns that never materialize.

“This is someone using his former position with the government who appears to be frightening people into purchasing these coins,” says Bruce Steckler, a Dallas-based lawyer.

It all started for Steckler a few years ago when his wife’s college roommate called him out of the blue. Her elderly mother-in-law had spent more than $100,000 on commemorative gold coins. He did some digging around and found other instances of people giving large sums of money to U.S. Money Reserve, and he got in touch with a numismatist (an expert in coins).

“Their value is about a third of what they paid for them,” Steckler says.

Steckler learned that the company had been ordered by the Texas attorney general’s office to pay up to half a million dollars in restitution to customers in 2011 for selling commemorative coins and claiming they would increase in value. Now the company sells gold and bullion, and it claims it no longer sells commemorative coins. The issue, for Steckler, is whether their customers fully understand what they’re getting themselves into.

“They’re selling it as an investment or some sort of protected asset,” he says.

Steckler, however, knows the age of his clients, and he says he just wants to get them their money back. He says that he was able to file a class-action lawsuit with his California client because the state has strict laws pertaining to the abuse or defrauding of the elderly.

“Unfortunately, in the state of Texas, it’s really difficult to bring up class-action claims against companies,” Steckler says.

For that reason, he takes on each client on a case-by-case basis, hoping to reach a resolution with the Austin-based company before resorting to litigation.

Have you or a family member purchased gold coins from U.S. Money Reserve?

CONTACT US to find out if you have a case against the company.