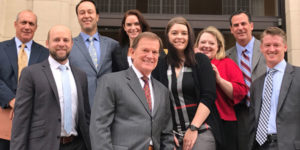 The Texas Lawbook recently interviewed Bruce Steckler about his case representing David Blank, The Diamond Doctor, in a high-profile fraud and racketeering case in federal court

(Aug. 21) – Two seasoned Dallas trial lawyers say they have never seen anything like what they witnessed last week in federal court in the fraud and racketeering case between the Diamond Doctor and a Tennessee lawyer.

Never, says Randy Johnston, has he seen a federal judge rule that a lawyer likely fabricated a client and committed abuse on the judicial process, and then a lawyer representing the first lawyer “almost begged the judge” in open court to postpone a trial so they could try to settle the dispute.

At the heart of the case, David Blank, the former owner of the Diamond Doctor, accused Tennessee trial lawyers Brian Manookian and Brian Cummings and their law firm of engineering a $3.6 million scheme to extort money from the Dallas-based jeweler. Manookian countersued, claiming that Blank and his company committed diamond fraud and cheated customers.

Adding intensity to the litigation, the FBI has opened an investigation of the Nashville lawyers and his firm and has been actively following the Diamond Doctor case, according to lawyers familiar with the case.

Blank and Manookian settled their litigation in the wee-hours of Wednesday morning after the federal judge handling the trial ruled that Manookian acted in bad faith in key parts of the case. Terms of the agreement are confidential, but The Texas Lawbook has learned that Manookian agreed to a permanent injunction to leave Blank and his family alone for good.

“David spent millions of dollars in legal fees and expert services for two reasons: he wanted his reputation back and he wanted peace,” says Johnston, who is the managing shareholder of Dallas-based Johnston Tobey Baruch. “He got both. “There is zero evidence – not one shred of evidence – that David or his family did anything wrong, and we were ready to prove that in court,” Johnston says.

Efforts to obtain a comment from Manookian and his Dallas lawyers were unsuccessful.

“I cannot tell you how difficult this has been on David and his family,” Steckler says. “This case was 24/7, non-stop work. One day, we were dealing with a non-profit set up to attack our client. The next day, we faced robocalls targeting our client’s customers. The next day, there were Facebook sites and posts falsely attacking our clients. “I’ve never seen a case like this before in my life,” he says.

The last few weeks – indeed, even the last few minutes – of the case proved fascinating.

Lawyers in the case conducted jury selection last Tuesday morning and chose eight jurors to hear the case. During the lunch hour, the lawyers learned that U.S. District Judge Amos Mazzant had adopted a sanctions order by U.S. Magistrate Kimberly Priest Johnson that was devastating to Manookian and his firm.

Blank’s lawyers filed an emergency motion on June 27 contending that websites, a Facebook page and robocalls were targeting Diamond Doctor customers with false, inflammatory allegations against the jeweler. The plaintiff’s lawyers claimed that the group behind the effort, Diamond Integrity Standards Foundation (DISF), was actually a fake organization operated by Manookian and the firm.

One of the websites proclaims, “IT’S TIME TO PUT NOTORIOUS FRAUDSTER DAVID BLANK BEHIND BARS.” The site, which plays the Chris Isaak song “Baby Did a Bad, Bad Thing” states, “We now know that he was also perpetrating a massive tax fraud on the State of Texas and the citizens of Dallas.” Another website encourages people to sue Blank and states that DISF has created a victims’ fund.

Court records show that Manookian testified under oath that he was merely a lawyer representing DISF and that his client is Felipe DeMase, who he says is a joint citizen of Italy and Argentina who contacted Manookian through the firm’s website about setting up the foundation.

When asked for specific details about DeMase, Manookian claimed he could not answer because the information was protected by attorney-client privilege.

Lawyers for Diamond Doctor say Manookian testified that DeMase visited his office once, but that no receptionists or other law firm staff could verify his existence because none were working that day and that the firm’s security cameras were not working either.

“Based on the record before the court, it is more likely than not that the DISF is an alter ego controlled by defendants, and Felipe DeMase is a fictitious individual,” Judge Johnson ruled.

“At the very least, defendants have deliberately obstructed the Court’s efforts to determine how the DISF came into possession of the Diamond Doctor customer information, and defendant Manookian has offered disingenuous testimony and untrustworthy documents in response to the court’s efforts to establish the nature and scope of his alleged representation of the DISF and Felipe DeMase,” Judge Johnson wrote.

“Furthermore, the creation and publication of the DISF websites appears to have been deliberately timed to interfere with or improperly influence potential jurors and witnesses,” the judge wrote. “Accordingly, the court finds Defendants’ bad faith behavior constitutes an abuse of the judicial process that warrants the imposition of sanctions under the court’s inherent powers.”

It was that order, according to Steckler and Johnston, that motivated Manookian’s desire to settle the case.

Johnston said he stood at the lectern before Judge Mazzant in Sherman on Tuesday afternoon to deliver his opening statements when defense counsel sought a delay in the trial in order to discuss a settlement with the plaintiff.

The judge responded that he enjoyed trials, that he believed the jury was eager to hear the facts in this dispute and that the parties could negotiate a possible settlement at the end of the day, after opening statements were finished, according to lawyers in the courtroom.

But lawyers for Manookian stressed that his client was interested in settling at that moment and that it would be too late after opening statements.

“They knew I planned to put serious allegations in the record in my opening and that I planned to call Manookian as my first witness, and they could not afford for Manookian to be forced to answer questions under oath,” Johnston said in an interview with The Texas Lawbook.

“They almost begged the judge to stop the trial so the two sides could negotiate,” Johnston says.

Johnston says his clients did not file a complaint with the FBI, but that they are cooperating.

“Every time the FBI calls, we answer their questions,” he says.

Steckler Wayne Cherry &amp; Love combines nearly a hundred years’ worth of experience trying over seventy-five cases to juries, judges and arbitrators (and preparing hundreds more that settled) in every field of law on behalf of both plaintiffs and defendants. The fact that we routinely litigate on both sides of the docket makes us dangerous to opposing cookie-cutter law firms that only represent plaintiffs or defendants.